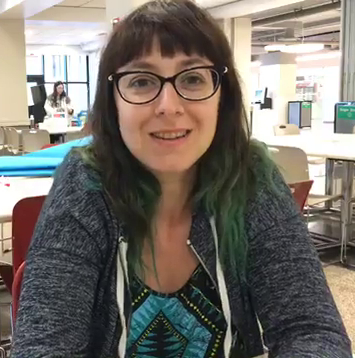 BIOGRAFIA
Alessandra Lamio first got in touch with the origami universe when she was a child, but she developed a strong interest in it only in medical school, when she heard about the use of Origami in therapy.
In 2010 she founded a cultural association called Educarta (Edu = education and Carta = paper), to spread in her city the use of origami as a teaching and therapeutic tool.

Since 2014 she is a full-time professional freelancer: She organises exhibitions, origami labs and training for teachers, but she also creates models on commission.

She was a member of the scientific committee at the three Italian conventions “Origami, dinamiche educative e didattica”, addressed to teachers and educatorswith the aim of promoting and spreading the use of origami as a teaching tool.

Together with Alessandro Beber, she conceived and organized the two editions of “Mountain Folding”, a summer residential convention focused on creativity and teamwork.

Between 2015 and 2016, she organized and curated the exhibition “Mujeres de Papel”, a tribute to femininity, exploring the role of women in the origami scene

He has exhibited her works in art exhibitions dedicated to origami in Italy, Spain, Taiwan and USA.

In her own origami production, she explores various genres, with a particular focus on volume in tessellations, in geometric and figurative models.

Most of her geometric works were invented empirically by playing with geometry and patterns. Since they are designed instinctively, without taking into account any geometric rule, they often have internal tension that make their collapse particularly tricky and fun.

Actually she is living in Pavia, Italy.